From Angels with Scaly Wings Wiki
Jump to: navigation, search

Bryce is the town's chief of police and a recurring character in the main story. He enlists the player's help with investigations after the incident at the portal between Reza and Maverick.

Bryce is a strong and caring dragon who is dedicated to his work as chief of police and to the town as a whole. He gladly shoulders the weight of his post and consistently does what he feels is best for the town. Bryce has become very popular among the locals, but still, he still frequently resorts to alcohol as a means of escaping the emotional strain that comes with his position. He is proud of his body, and rarely hesitates to show off. He values friendship and loyalty above all else.

As a child, Bryce loved playing "Explorers" with his friends. The game consisted of everyone splitting into groups, exploring new locations, and then sharing their discoveries with each other. One day, though, Bryce's friends had to stay in school longer than usual. Bored and impatient, he went alone to explore an ancient cave system. The cave wasn't very complex; however, while exploring, the ground below Bryce collapsed, trapping him. In an attempt to climb out, he fell and cut his snout on a rock. He was rescued a few hours later, but the cut scarred.

Bryce's neck scars are from when Miles bit him. He was saved by the then-rookie Maverick, who was never the same afterward.

[insert something about Bryce helping Zhong see his parents] 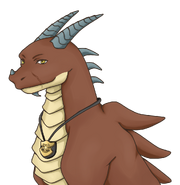